I love visiting Beiler Family Farm, and last week I got the opportunity to visit again on a beautiful warm and sunny day!

Whenever we pull up to the farm, we are always greeted by a happy animal.

Of course my kids jumped out of the car before I could even put it in park to give some love to the litter of Great Danes... and I followed right behind them.

Puppy play time is the best!

We chatted with Lydia Beiler for a bit and she let us know that farmer Jonas was over in the sugar shack cooking up some fresh maple syrup.

So off went to find him, with our new puppy friends following our every step.

Over the hill and back behind the barn among the maple trees we found Farmer Jonas in a cloud of sweet smelling steam cooking up maple syrup.

He greeted us with a big smile, waved us in, and got to showing us how it all works right away.

As he walked me through the process I made sure to take lots of pictures so that I can share the process with all of you.

The best way to do this is break it down into steps, so here it goes:

1. Sap is collected from the maple trees.

There are about 2,000 taps on the Beiler property, and they are all connected with the tubing you see in the pictures below. 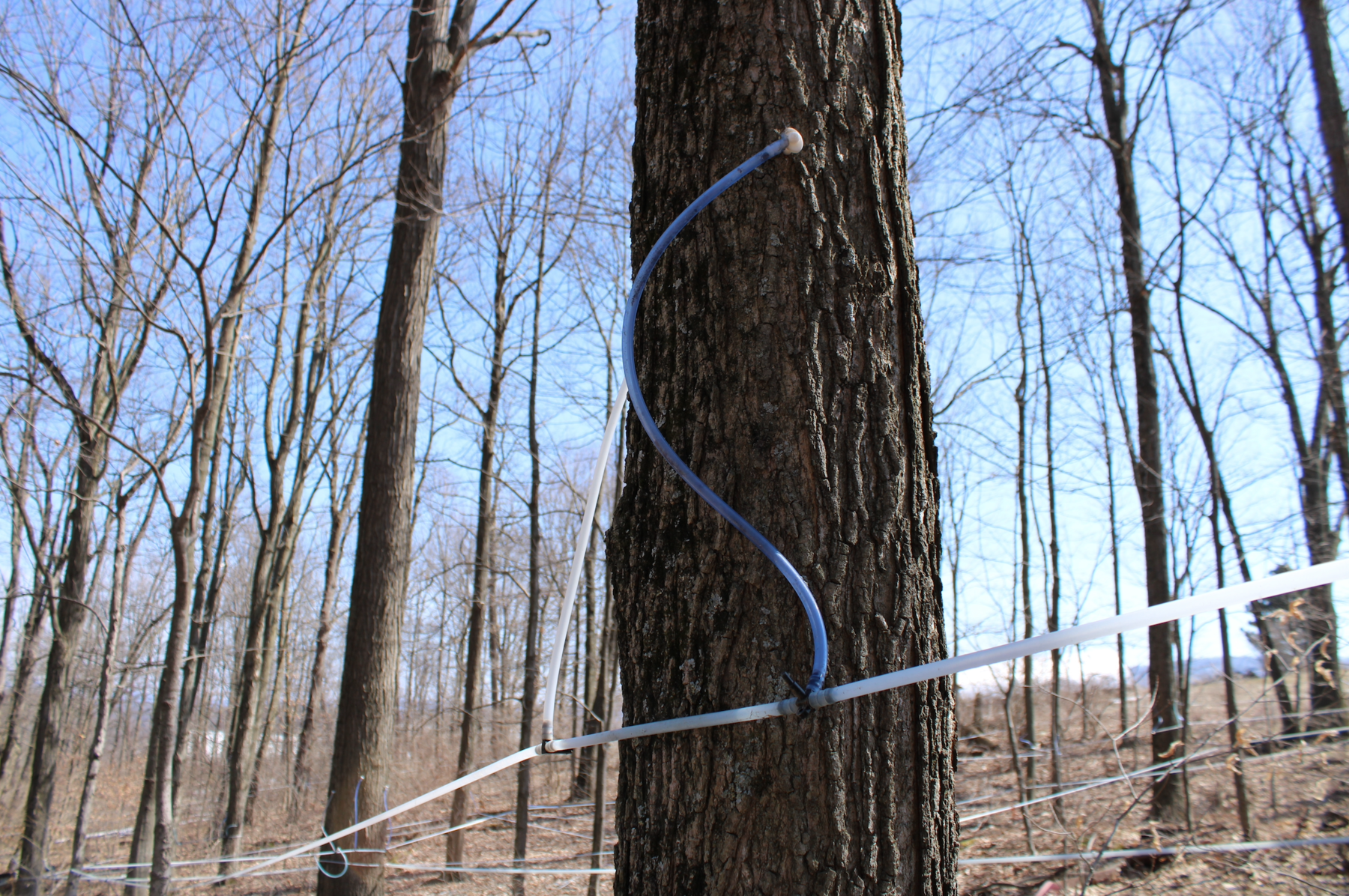 The tubing is attached to a vacuum pump system that helps to extract more sap from the trees than you would regularly get with just a tap and a pail. 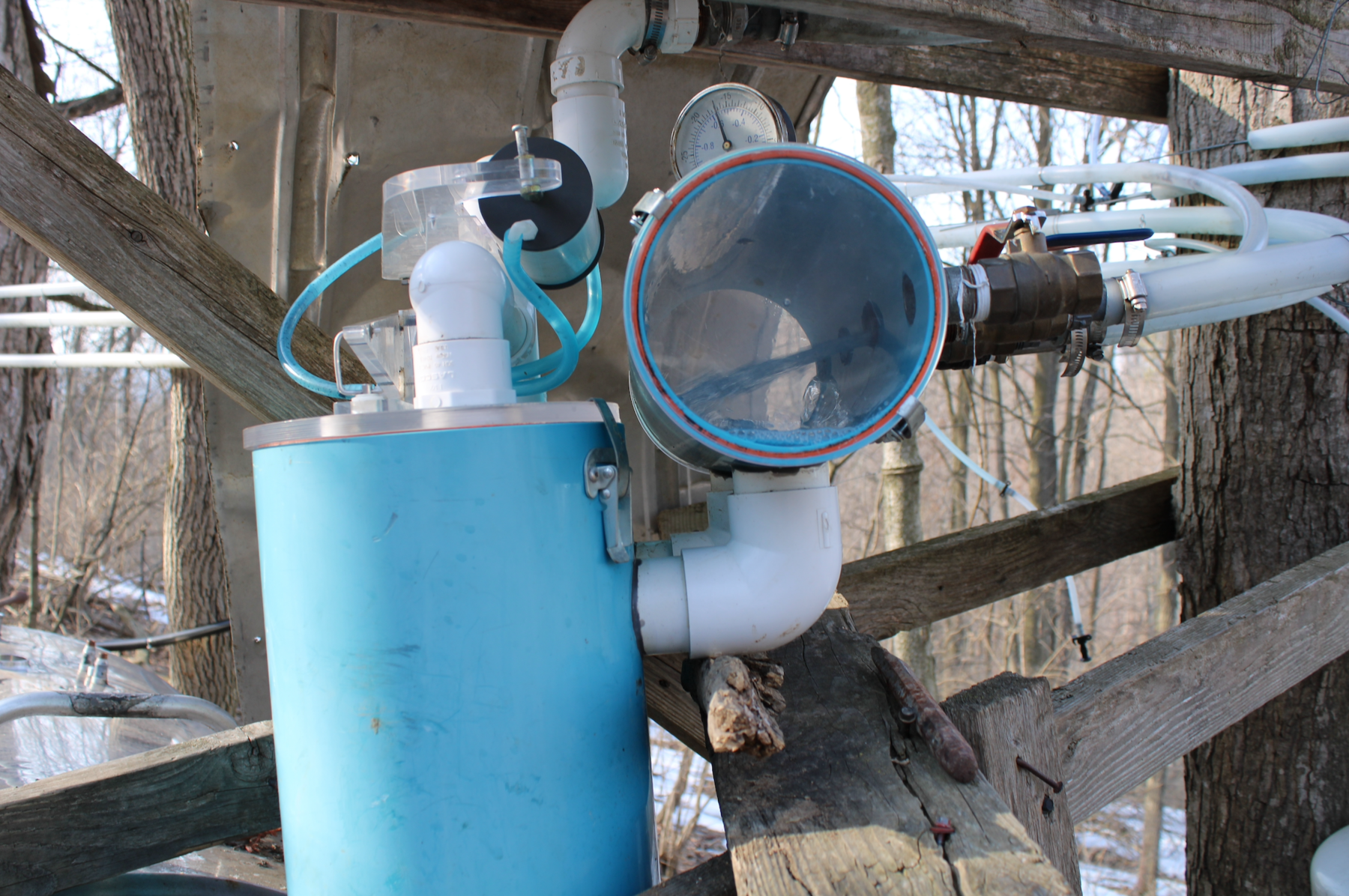 The sap is pumped through the lines and is emptied automatically into a big shiny holding tank. 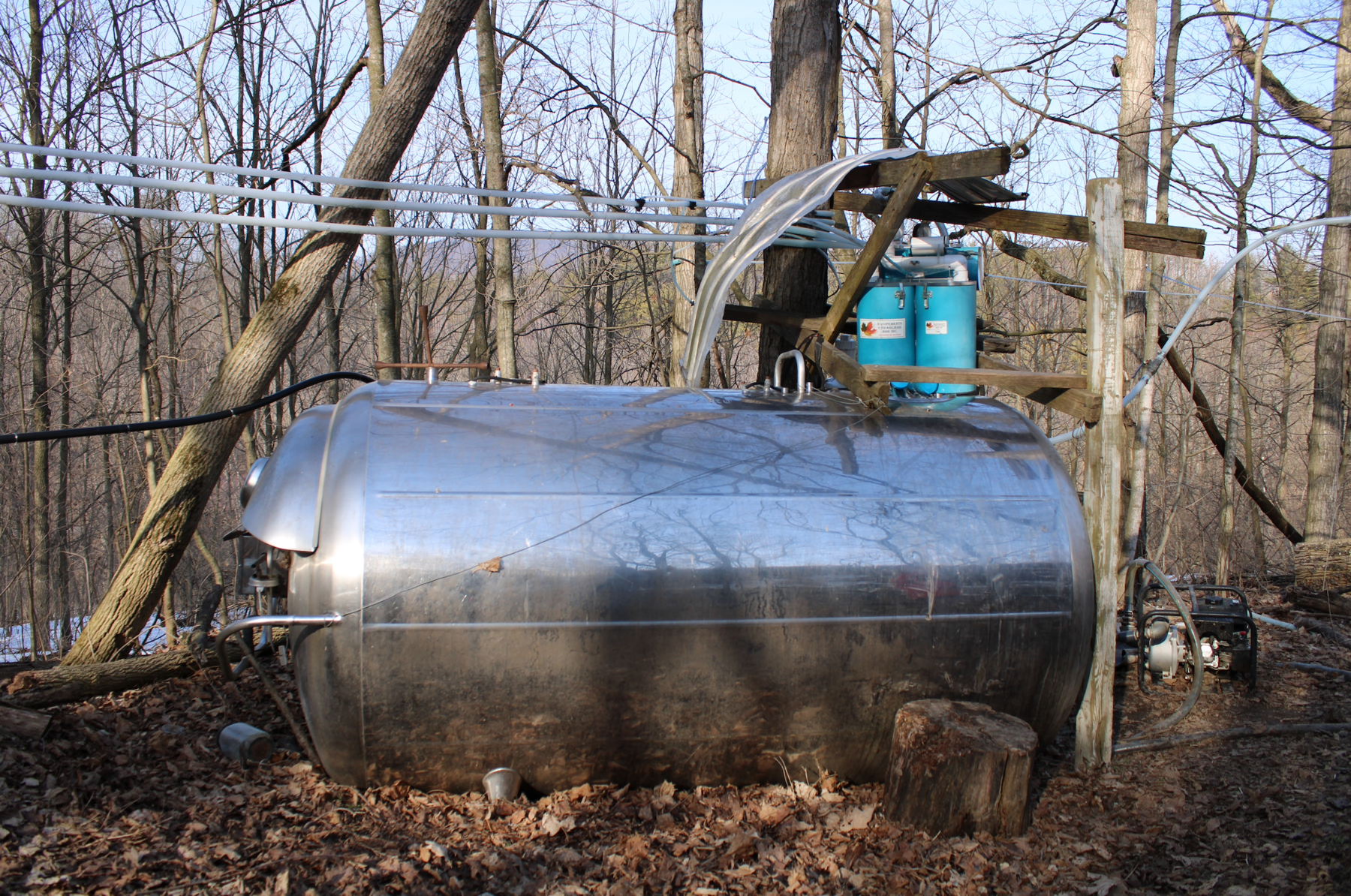 The sap from that tank then gets pumped to another tank next to the sugar shack.

The sap in the holding tank then pours into the wood fired boiler. The boiler is made up of multiple sections. As the sap heats the water evaporates, this changes the viscosity of the liquid. As the sap gets thicker and thicker it naturally moves through the different chambers until it reaches the end stages and becomes maple syrup.

(First section where the sap comes in) 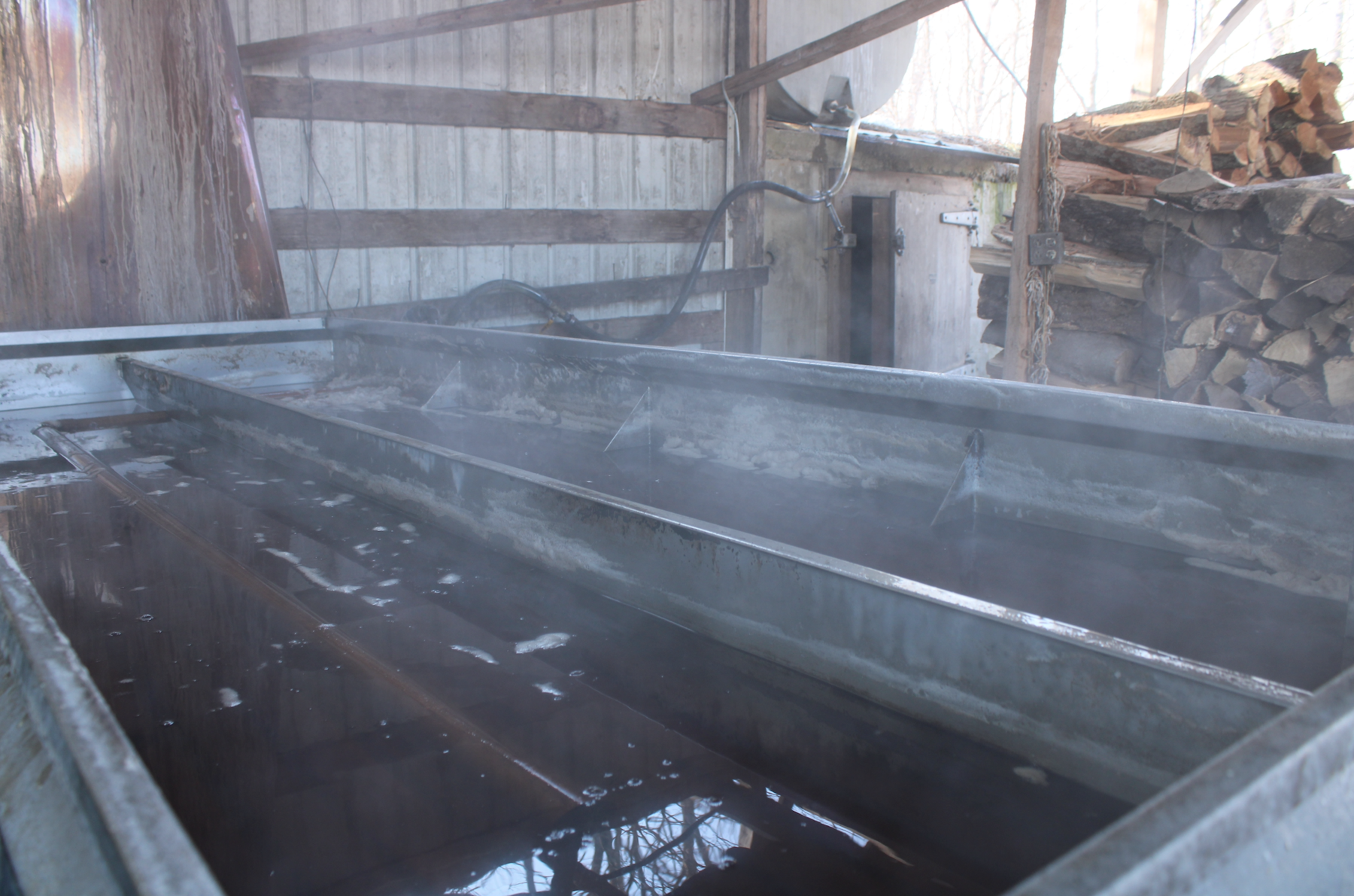 (Second section where it really starts to become syrup) 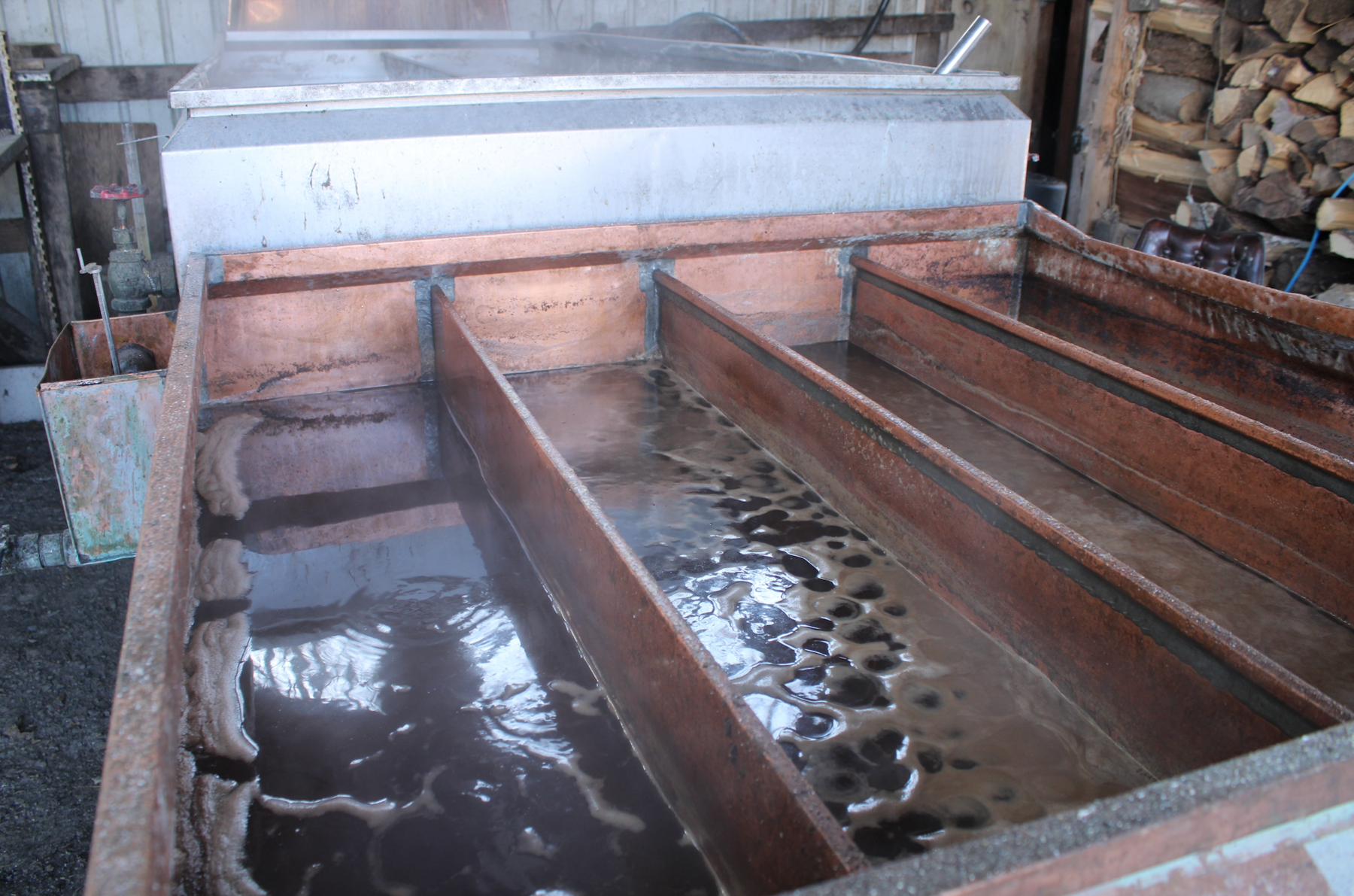 Farmer Jonas has been making maple syrup for a long time and he intuitively knows when to add more wood, and when the syrup needs to be poured out. 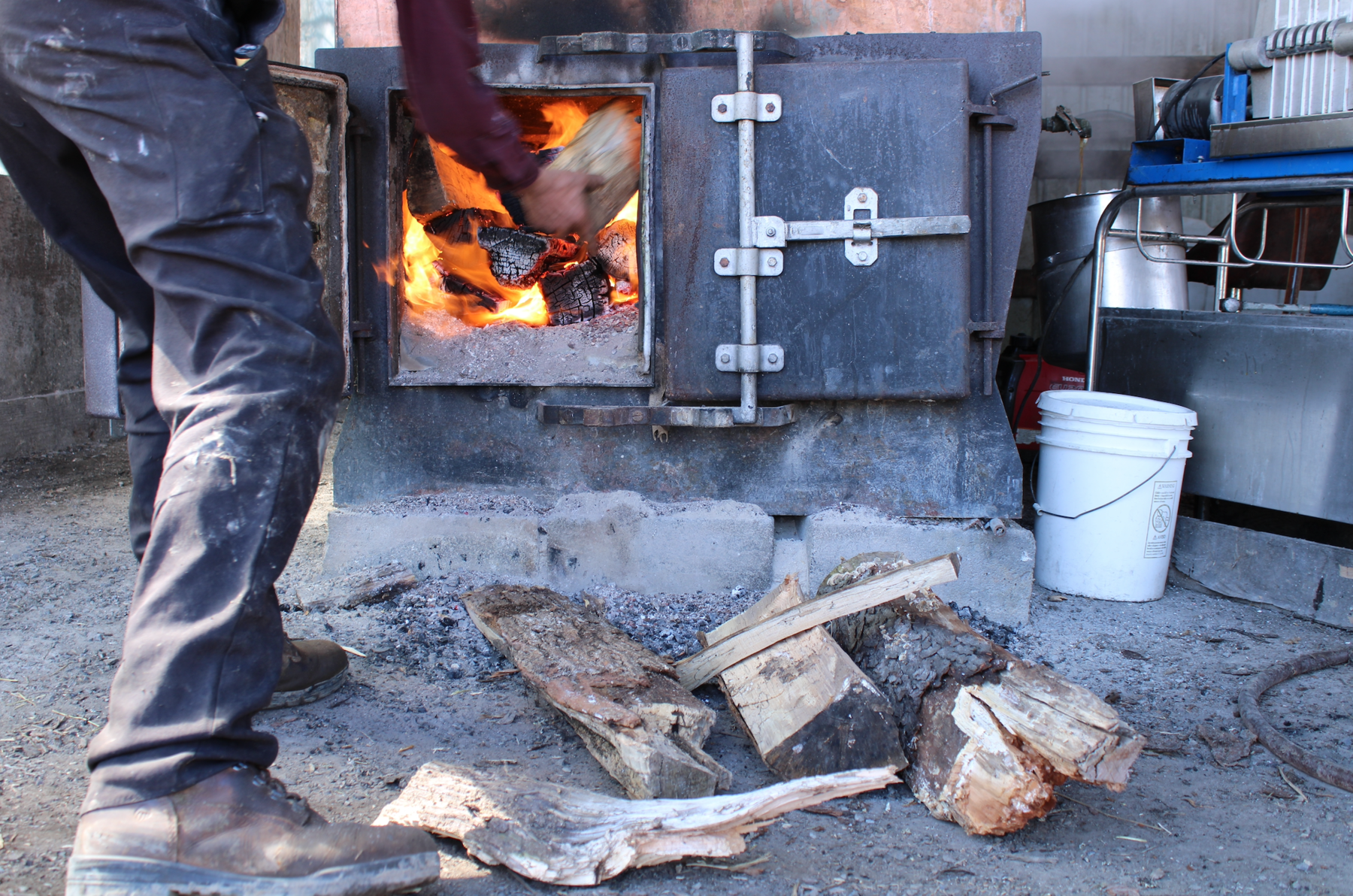 However, he did have a little gauge on the side of the boiler next to the spigot. He kept his eye on that gauge and he let me know when the gauge gets to the number 7 that is when he has to open the spigot and let out the finished maple syrup. 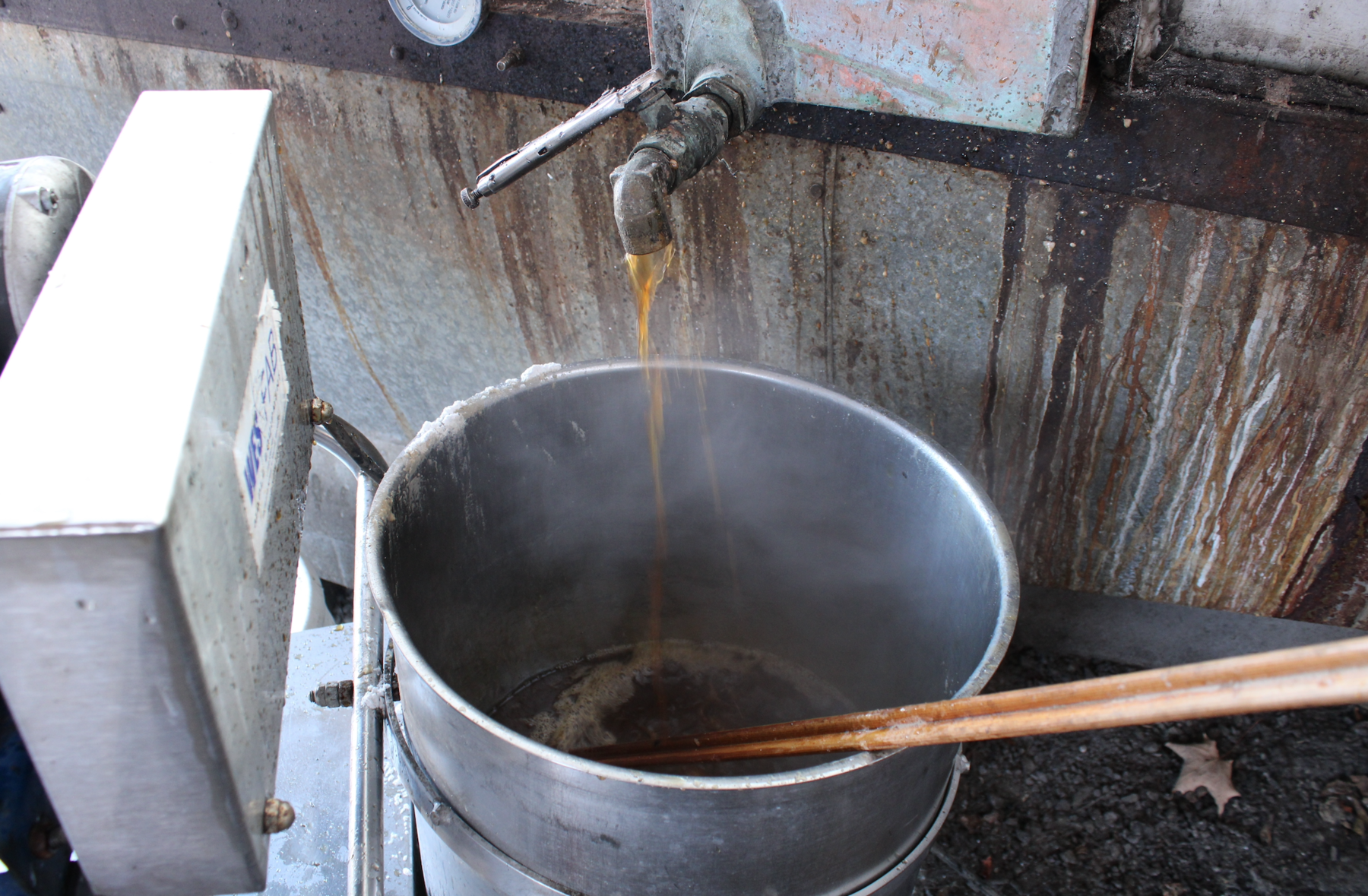 That syrup then travels down a tube and into a barrel that holds the batch made that day.

If he does not open the spigot at the right time, the whole batch of syrup can burn and ruin the tray that it sits in, and those trays aren’t cheap. As he told me this he pointed up to the rafters at the previous tray he had burned accidentally a while ago while making maple syrup.

It is very much like if you have ever made caramel at home and took it too far. It burns, smells, and ruins your pan. Same thing with maple syrup making!

And yes, we did get to try some fresh hot maple syrup right out of the spicket. To say the least my kids were literally drinking it out of the jar!

Step four is pretty straight forward, farmer Jonas and his boys bring the maple syrup to Lydia and she helps to jar and bottle it so it is ready to sell to customers.

And that is about as pure and simple as it gets folks. Beiler Family Farm maple syrup is the real deal, and by far the best I have ever had!

Learning about the maple syrup process was the main event but there are always things going on at the farm.

We got to bottle feed a baby lamb, pet the horses, catch escaped chickens, and see the various projects the Beilers have been up to (which is always fascinating!) 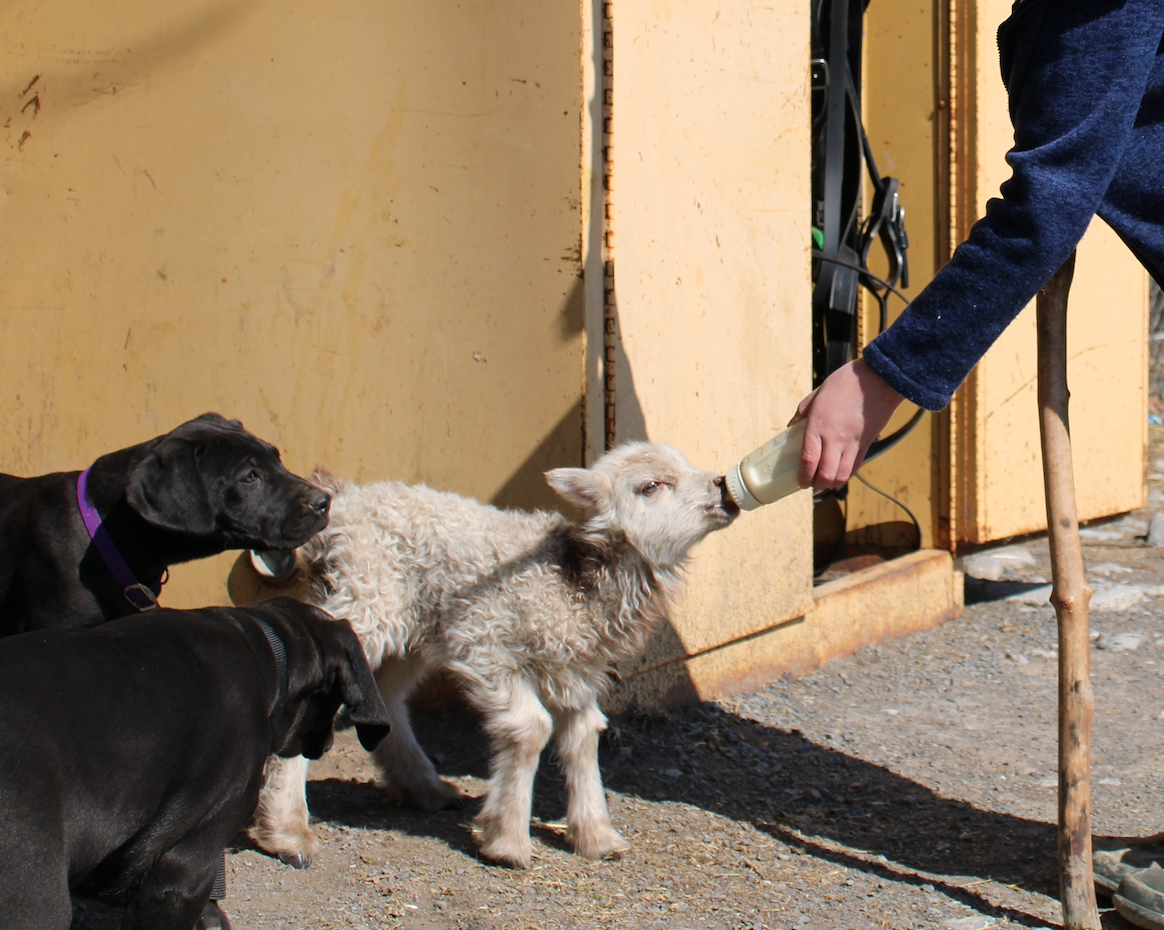 But honestly it just feels good to be there. To sit on the earth under a pile of puppies in the warm sun after a long winter is exactly what my soul needed that day!

I mean who doesn’t need to be under a puppy pile, right?

And the Beiler Farm Team 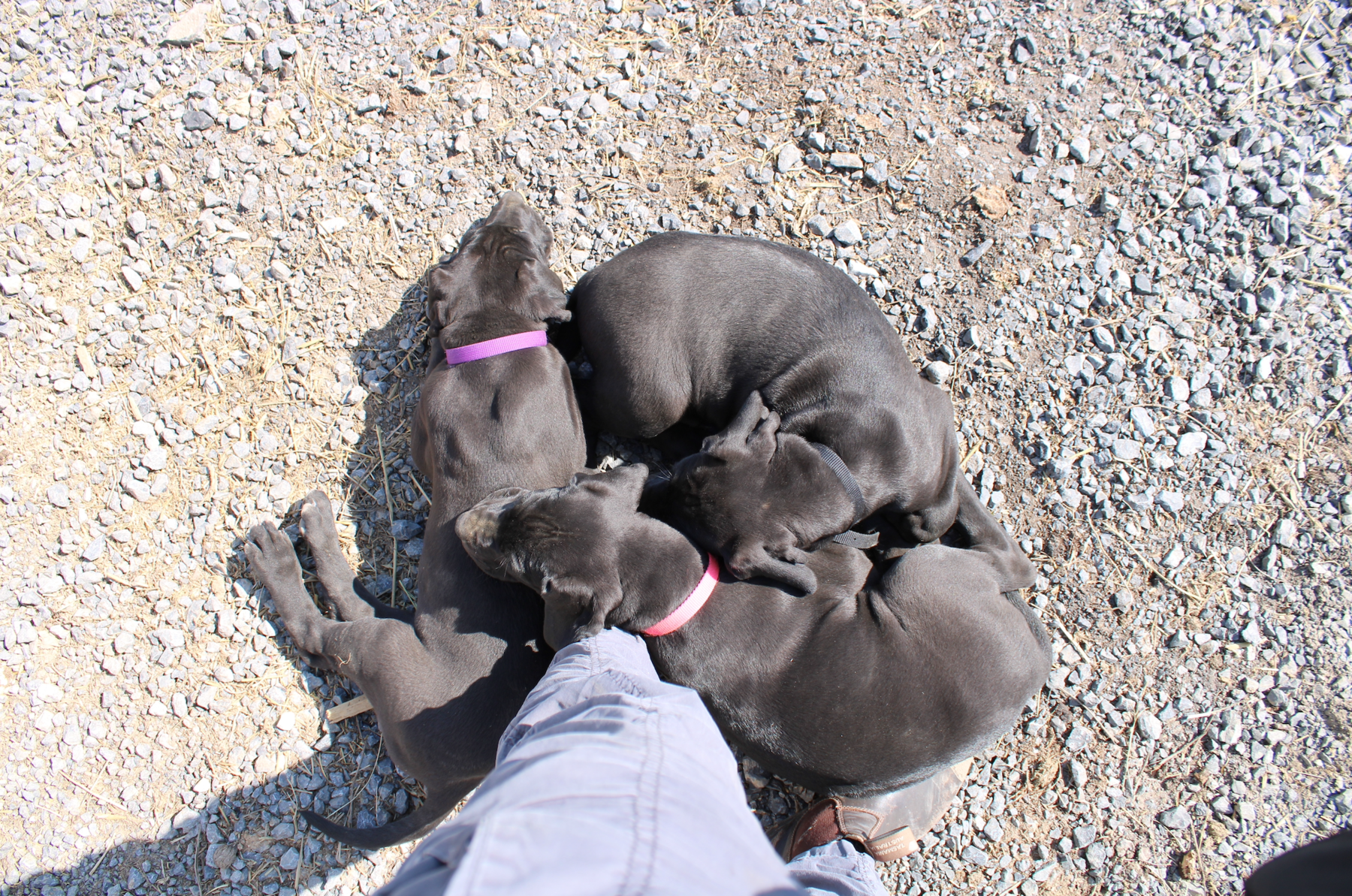 (Puppies piled on my feet, I was stuck there for a while)

Maple Syrup: Grade A or Grade B which one is better? 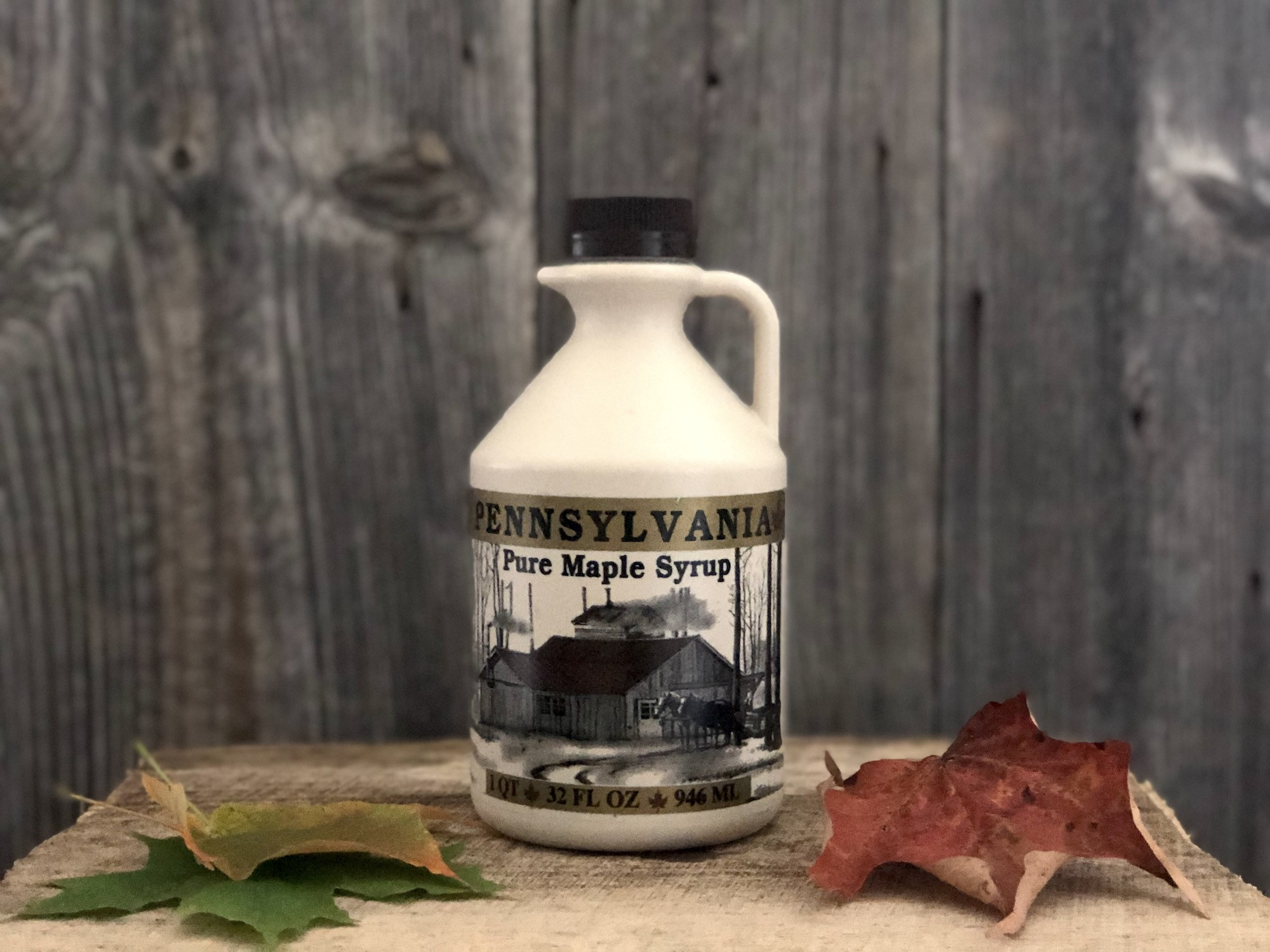 5 fun facts you need to know about cheese! 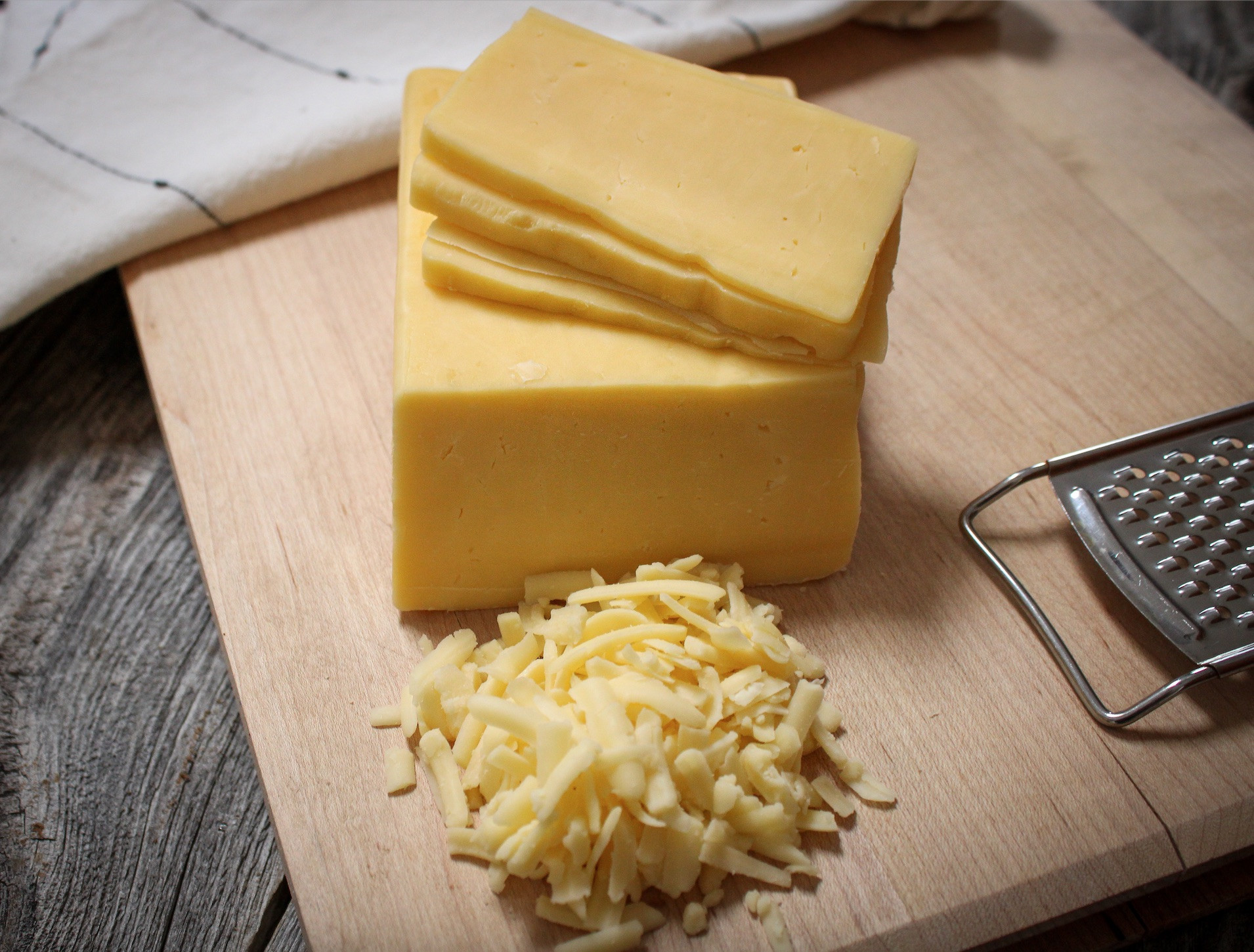 My visit to the farm: Dusty boots, dirty hands, and a happy heart! 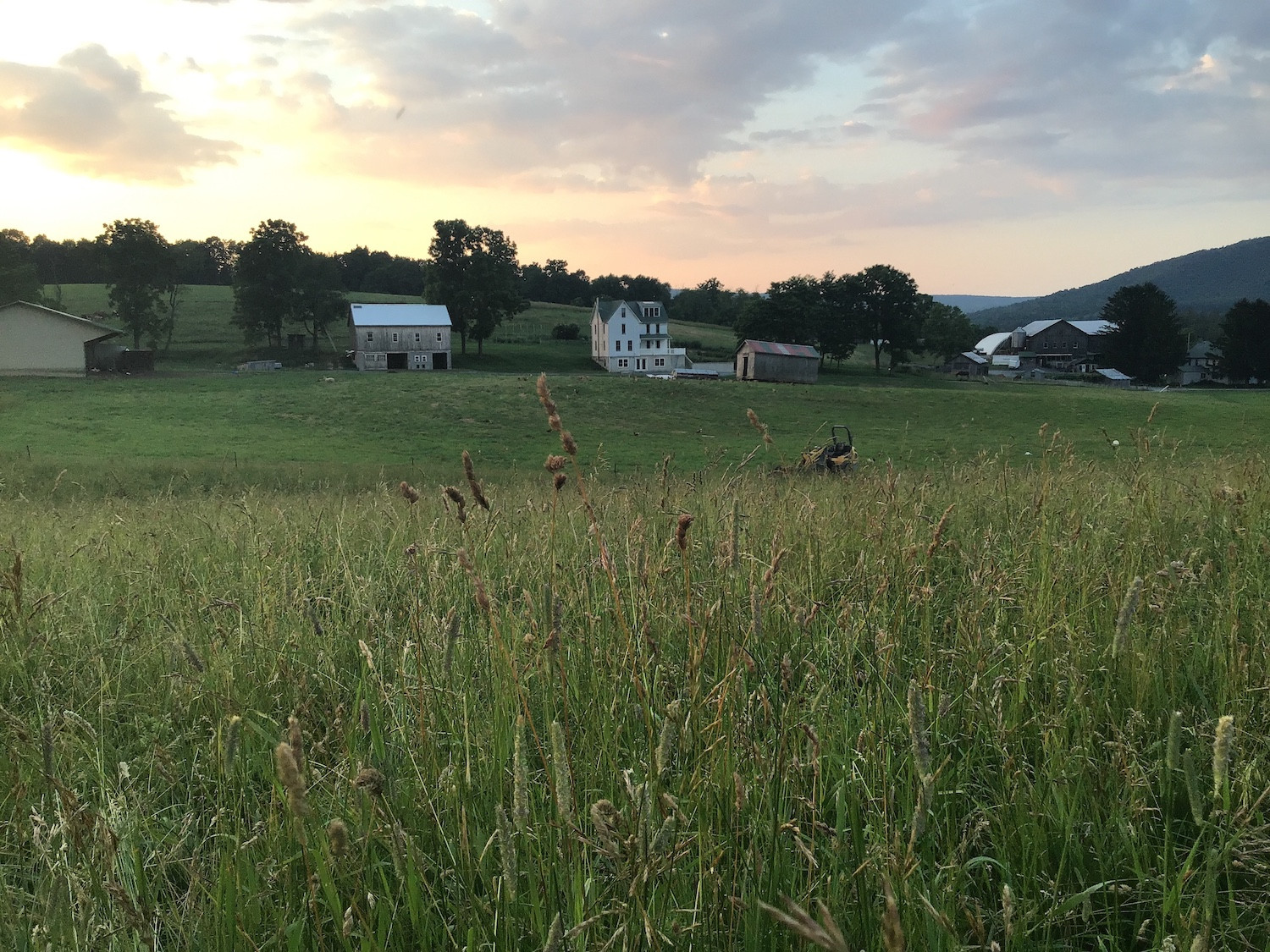